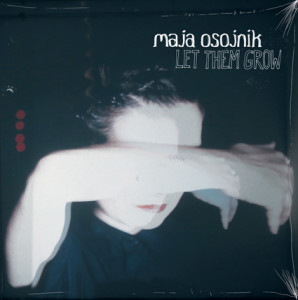 An anthroposophical striptease of the soul, between dystopian chansons, primordial mantras, and musique concrète—both timeless and masterful.

„So COME OUT, you rotten cocksucker,
here’s your fucking POP SONG.“

After fourteen band albums that range from old to new music, improvised to experimental, folklore to industrial, Maja Osojnik is releasing her first solo album LET THEM GROW, in which she searches for the simple song that combines all of these elements both in herself and in its sound.

“I am now almost forty years old. But instead of feeling that I understand the world better now than I did before, I have times when nothing at all truly makes sense to me anymore. I am amazed at how often this world is slipping out of my reach. In these moments, the world seems strange to me, and I seem a stranger in it.”

LET THEM GROW is the product of a retreat, an introspection, a re-alignment. Osojnik asks about the self, asks whether it is possible—beyond the fundamental impossibility—to be understood. She asks about the things people do when they love others and about the things they suppress. What does it mean to live an emancipated life today? In this very personal album, Osojnik examines the strange phenomena of contemporary interpersonal relations, with songs that range from dirty to soft, sensual, dazed, complex, cold, spherical, poignant, and feminine.

„estranged we failed the terms of us, you see, i changed“
„why are you pretending not to stare at me?“
„i undress my distance“
„And what’s with all that whispering? I’M NOT SLEEPING.“
„and then i imagine myself how i lovingly but yet convincingly scream at you“
„You will be informed of nothing! In a tight grip of massive boredom kevin wants to be punished, lisa has nowhere to go.“
„one last move and then i freeze“

Each sound on Osojnik’s album is carefully generated and uniquely de-familiarized, for example by using so-called “rejects,” which she compiles in a library of broken sound scraps. This collection consists of the results of digital gaffes and faulty processing, unintentionally distorted, overmodulated, or phase-delayed. “I am partial to what isn’t approved by society—that which has been broken.” In the ether of LET THEM GROW, these rejects are re-generated, they are given context, they expand to become the substance of Osojnik’s songs.